The Division of Regenerative Medicine also focuses on stem cell biology and their niches using mouse and human genetic models, tissue culture approaches and molecular biology to model the complex interactions between stem cells and their micro-environment. Multi-omics, molecular and cell biological techniques are combined to achieve a systems level understanding of these complex processes.

Our three investigators are engaging cutting edge technologies and concepts to decipher these interactions:

Currently, Rafii's work is focused on identifying the molecular and cellular pathways involved in organ regeneration and tumor growth. He has established the concept that vascular endothelial cells are not just inert plumbing to deliver oxygen and nutrients, but also by production of tissue-specific growth factors, defined as angiocrine factors, support organ regeneration and tumor proliferation. He has shown that bone marrow endothelial cells by elaboration of angiocrine factors, such as Notch ligands, support stem cell self-renewal and differentiation into lymphoid and myeloid progenitors. He has recently demonstrated that liver and lung endothelial cells are endowed with unique phenotypic and functional attributes and by production of unique instructive growth factors contribute to the hepatic and alveolar regeneration.

He employed this knowledge to induce differentiation of the murine and human pluripotent embryonic stem cells into functional and engraftable vascular and hematopoietic derivatives. He developed screening approaches to exploit endothelial cells as a vascular niche platform to identify as yet unrecognized novel angiocrine factors that instruct organ morphogenesis as well as orchestrating stem cell self-renewal and differentiation.

The Zhou lab studies how specific cell types are created during development and uses this knowledge to regenerate vital cells by reprogramming in adult organs. The adult cells demonstrate remarkable stability, maintaining their unique identity despite constantly changing physiological conditions. If this stability is undermined, diseases of metaplasia and cancer can arise. On the other hand, controlled manipulation of cell identity (converting a cell from one specialized type into another) is a key step towards tissue regeneration. Our laboratory investigates the molecular machinery that safeguards normal cell identity and seeks to control this process to regenerate tissues that are lost due to disease or injury.

Currently, two major model systems are employed. The first is revolved upon beta cells, the sole provider of insulin for the body. The goal is to regenerate beta cells in adults as a way to treat Type I diabetes, a disease marked by a lack of beta cells due to autoimmune attacks. In development is a novel approach to regenerating insulin-secreting cells by reprogramming cells of the human gastrointestinal mucosa. To protect the new insulin-producing cells from autoimmunity, genomic engineering of vascular cells that control immune cell trafficking to endocrine islets is being pursued as a therapeutic strategy.

In process is the study of intestinal stem cells in large intestine mucosal regeneration. The Zhou lab has identified critical factors without which colon mucosa is transformed into small intestine mucosa, with implications in diseases such as short-bowel disease, inflammatory bowel diseases, and colorectal cancer. Cutting-edge technologies, including genomic engineering, drug screening, human embryonic stem cells, and human organoids, are employed for mechanistic understanding and therapeutic development. 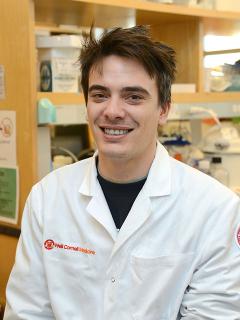 Development and maintenance of the haematopoietic system relies on a scant number of self-renewing haematopoietic stem cells (HSCs) residing in the adult bone marrow and representing the top of a complex cellular hierarchy. Transplantation of HSCs, harvested from either bone marrow, mobilized peripheral blood or umbilical cord blood (UCB), has become the standard of care for numerous hereditary and malignant blood diseases. However, the limited availability of optimally human leukocyte antigen (HLA)- matched donor HSCs remains a challenge, especially for individuals of non-Caucasian background or mixed ethnicity. While the immunologic naïveté of UCB enables transplantation despite antigen mismatch, the relatively low HSC dose slows engraftment and raises the threat of graft failure.

In vitro expansion of UCB HSCs has been vigorously investigated, but despite substantial progress, current protocols are not yet clinically approved. Consequently, and because considerable interest in illuminating fundamental aspects of blood development, de novo generation of HSCs from non haematopoietic sources has become a major objective for the field, a holy grail, with wide-ranging implications for HSC biology and transplantation medicine.

This research has converted endothelial cells to engraftable HSC-like cells through direct conversion by expression of FOSB, GFI1, RUNX1, SPI1 (FGRS). Propagation of these cells onto a vascular-niche-like environment has substantially enhanced reprogramming efficiency, emphasizing the importance of inductive cues from the physiological micro-environment in the orchestration of haematopoietic specification. The converted cells acquired colony-forming potential and were successfully engrafted in recipient mice, after primary and secondary transplantation, producing long-term myeloid and B lymphoid progeny. This innovative approach constitute a landmark advance towards engineered autologous bone marrow transplant and hematological disease modeling.