In addition to investigating topics in the ethical practice of medicine, the Medical Ethics Division works to elucidate and clarify the aspects of research studies that make them ethical. It also helps other researchers develop and conduct ethical studies. This service is run by Dr. Fins and Inma de Melo-Martin, Ph.D., M.S.

The Division of Medical Ethics is engaged in research initiatives that explore a wide range of topics both in the practice of medicine and in medical research. These include, among others, patients' needs for autonomy and support, issues surrounding reproductive and genetic biotechnologies, end of life care, public health ethics and social justice, and the developing field of neuroethics.

Dr. Fins led a team of researchers in studying the role of advanced directives and how patients and proxies understand their moral obligations to each other. A "proxy" is someone to whom patients grant legal power-of-attorney should they become incapable of making medical decisions for themselves. The results, which were published in the January 2005 issue of the Journal of Pain and Symptom Management, suggested that the pact between patients and their proxies is much deeper and more flexible than previously thought. "It appears that it's not so much a contract as it is a kind of covenant, based on mutual experience and trust. And our study found that, because of this trust, patients allow proxies discretionary moral judgment that allows them to go beyond cryptic instructions to either withhold or provide care," said Dr. Fins. Read the full press release here. 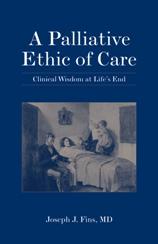 Dr. Fins is renowned internationally as a champion of the rights of patients to be treated as whole individuals and receive appropriate and ethical care, and especially of their right to make decisions concerning their treatment. During the past 15 years much of his work has focused on ethical issues related to the end of life and palliative care. His most recent book, "A Palliative Ethic of Care: Clinical Wisdom at Life's End", both explores why there are so many difficulties surrounding end-of-life care and presents a guide for clinicians to help patients and families set and achieve goals of care. He wrote it to help clinicians, residents, attorneys, and medical students understand the transition from curative care to palliative care and to guide them through the great complexities and difficulties involved. Much of the book grew out of Dr. Fins's experiences – as an internist who sometimes had to care for dying patients and as a physician leading ethics consultations.

The book puts death and dying into a broader social and philosophical context and examines why issues surrounding the right to die have been so difficult. It provides guidelines for goal setting and a strategy for effective palliative care, with the use of the Goals of Care Assessment tool (GCAT). The GCAT is a framework for exploring major issues encountered by patients with terminal illnesses, for identifying goals of care, and for achieving them in a way that best serves the patient and family. Read more here.

Dr. Fins wrote the original draft of a palliative care and training act that was recently signed into law by the New York State Legislature as part of Governor Spitzer's 2007 Budget Bill. Dr. Fins also analyzed and developed amendments to the act, which provides $2.1 million in grants to medical schools and $2.5 million in grants to residency training programs. The legislation additionally establishes a statewide Palliative Care Education and Training Council that will serve as a resource center for best practices at the end of life and in palliative care.

Ethics and the Biomedical Sciences

The Division of Medical Ethics is concerned with the many ethical issues surrounding advances in the fields such as genetics, reproduction, stem cell research and vaccinations. Among the issues that deserve exploration are: how to design ethical studies and recruit appropriate human subjects for testing new technologies, how much to regulate scientific research, and how to put into practice new medical technologies in a way that respects individual rights and social justice.

Much of the work of Inmaculada de Melo-Martín, Ph.D., M.S., focuses on these issues. Trained in philosophy and molecular biology, she is especially interested in research involving reproduction - including in vitro fertilization (IVF), genetic testing and gene transfer. She has published widely on these topics, both in journals and in several books. Her most recent book, "Taking Biology Seriously: What Biology Can and Cannot Tell Us About Moral and Public Policy Issues", offers an account of the often misguided discussions that take place about human biology and the consequences for ethics and public policy. It explores mistaken beliefs about the role of genes in human life held by both proponents and critics of behavioral genetics, reproductive cloning, and genetic testing, and calls attention to the social context in which both the science and our ethical precepts and public policies play a role.

To support her efforts, Dr. de Melo-Martín was recently awarded a grant from the National Science Foundation for her two-year project, "Biology and Ethics: Evaluating the Claim that Biotechnologies Pose a Threat to Human Dignity". This study will examine the ways in which the concept of human dignity is used in current debates about biotechnologies such as human genetic enhancement, the creation of human-nonhuman chimeras, and embryonic stem cell research. It will provide the first systematic assessment of what several influential scholars and recent national and international science policy documents mean when they say that these technologies threaten human dignity. Thus, the research can play a role in improving dialogue between the sciences and the humanities, and between the sciences and society.

Over the past several years, Dr. Joseph Fins has pursued research focused on the neuroethical issues of disorders of consciousness. He is especially interested in the "minimally conscious" brain state, which is neurologically distinct from the vegetative state. Unlike vegetative patients, those in a minimally conscious state show intermittent intention, attention, and memory, and they have the potential to fully or partially recover. 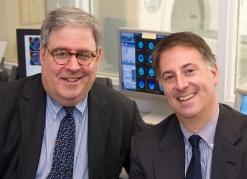 In collaboration with Nicholas D. Schiff, M.D., Associate Professor of Neurology and Neuroscience and Associate Professor of Public Health, Dr. Fins is working to understand the neuroscience of how people recover consciousness in order to elucidate clinical and ethical aspects of this impairment. In addition to discovering how best to treat minimally conscious patients, a major goal of their research is to have the knowledge to serve as advocates for brain injured patients, who have historically been neglected.

The past few years have seen exciting major developments:

The Weill Cornell Research Ethics Consultation Service was formed to help ensure that the university's biomedical research involving human subjects met the highest ethical standards. The service's formation was based on the realization that promoting research integrity needs to go beyond regulation - it has to be integrated into the fabric of scientific research.

The service is composed of three faculty members of the Division of Medical Ethics: Joseph J. Fins, M.D., M.A.C.P., Inmaculada de Melo-Martín, Ph.D., M.S., and Samantha Knowlton, M.D., M.S., who help researchers at every stage of a project to design and carry out ethical studies.

Samantha Knowlton, M.D., M.S., is a Research Subject Advocate in the CTSC, where she works with investigators and staff to ensure that studies are conducted safely and ethically, with protection of human subjects accorded the highest priority.