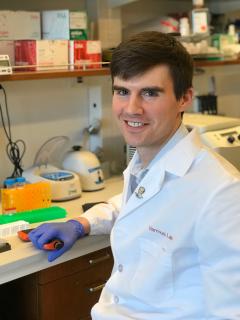 Dr. John Ferrarone, a Fellow in Medicine in the Division of Hematology and Medical Oncology, has been named the Lee Cooperman Physician-Scientist of the Damon Runyon Cancer Research Foundation. With this honor, Dr. Ferrarone will receive a four-year award in the amount of $460,000 to support his research activities in the area of lung adenocarcinoma, which is the most common form of lung cancer. Specifically, Dr. Ferrarone is studying lung adenocarcinomas that simultaneously carry mutations in the genes KRAS and LKB1. Of the patients who develop lung adenocarcinoma, approximately 10% will have a tumor that harbors mutations in both KRAS and LKB1. Patients that have this particular form of lung cancer are more likely to suffer from brain metastases and will develop resistance to treatment more rapidly.

In order to identify and target the vulnerabilities in lung cancers that have mutations in both KRAS and LKB1, Dr. Ferrarone is utilizing the CRISPR/Cas9 DNA editing technology on a genome-wide scale. Using CRISPR, he will introduce gene “knockouts” in lung cancer cells carrying both KRAS and LKB1 mutations to see which genetic disruptions are most lethal to the cancer. The identification of the most significant cancer cell vulnerabilities may lead to the development of new targeted therapies to combat this particularly aggressive form of cancer.

Dr. Ferrarone joined the Division of Hematology and Medical Oncology in 2015. He is currently working in the laboratory of Dr. Harold Varmus in the Meyer Cancer Center at Weill Cornell.