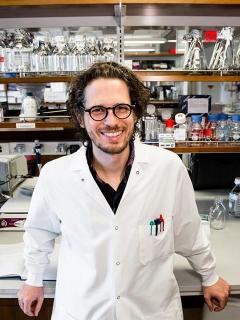 Dr. Dan Landau, Associate Professor of Medicine, Division of Hematology and Medical Oncology, and team have published a paper in Cancer Discovery describing a new technique that can analyze the thousands of DNA methylation changes detected in tumor cells and infer which ones are likely driving tumor growth.

In the realm of DNA mutations, cancer researchers have been trying to distinguish “driver” mutations from more abundant “passenger” mutations that have no effect on cancer. “Though there are now sophisticated methods for making the distinction among genetic mutations, techniques for distinguishing driver methylation changes from passenger methylation changes have not been nearly as sophisticated,” says Dr. Landau, a member of the Sandra and Edward Meyer Cancer Center at Weill Cornell Medicine, a core member of the New York Genome Center (NYGC), and an oncologist at NewYork-Presbyterian/Weill Cornell Medical Center.

The exciting new algorithm, MethSig, uses available information to estimate when a given methylation change is likely to be a cancer driver. “Ultimately we envision being able to map the entire landscape of cancer-driving DNA methylation changes, for different tumor types and in the contexts of different treatments, so that we can expand the scope of precision medicine beyond genetics to include also the critical dimension of epigenetic changes in cancer, ” says Dr. Landau.