New Recruit and New Science on HIV-AIDS: Cure and Vaccine 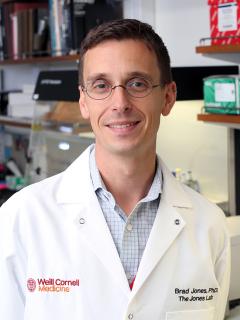 Newly recruited from George Washington University to the Division of Infectious Diseases, Dr. Brad Jones is a nationally and internationally recognized authority in the field of HIV-AIDS. A global pandemic since the first clinical cases of AIDS were observed in the U.S. in 1981, HIV-AIDS has claimed more than 34 million lives to date. Dr. Jones was recently invited to give the plenary basic science lecture at the 22nd International AIDS Conference held in Amsterdam, the Netherlands, where he was tasked with conveying scientific findings to a lay audience. The event hosted more than 18,000 delegates from 160 countries, including former President Bill Clinton, Prince Harry, celebrities, and many others who have dedicated their time to furthering awareness of HIV-AIDS – a syndrome that seeks to attack and destroy the immune system.

With 11,000 listeners in attendance, Dr. Jones’s presentation provided an overview on the newest science in HIV regarding cure and vaccine and it was geared to primarily non-basic scientists, clinicians, community members, and other stakeholders. “The challenge, which seemed rather daunting at first, was to reasonably represent two broad fields of study (cure & vaccine) at a level that was both accessible to a lay audience and perceived as up-to-date and balanced by experts,” says Dr. Jones. Dr. Jones was allotted 25 minutes to accomplish this goal, and as evidenced on Twitter, his efforts were extremely well received with numerous comments such as “the clearest talk on the subject of HIV cure and HIV vaccines I have ever heard.”

Today, although antiretroviral drugs (ART) can contain HIV and suppress the virus in the blood to practically undetectable levels, they cannot completely eradicate HIV from a person’s body - due to the persistence of viral reservoirs. For his talk, Dr. Jones concentrated on this HIV reservoir, which is the main barrier to achieving HIV eradication. Known as HIV latency, this reservoir consists of HIV-infected cells that stay dormant and can remain undetectable for years, even decades, while ART is being administered. However, if antiretroviral drugs are discontinued, the virus will rebound from the reservoir.

Thus, using the story of the little Dutch boy (representing ART), who plugs the overflowing dam with his finger until help arrives, Dr. Jones provided details on two lines of strategy: either drain the reservoir, or reinforce the dam. There is the option of sterilizing the reservoir (meaning draining and eliminating all infected cells in a person), or, alternately, strengthening the immune response so that the HIV-infected cells do not do damage. Sterilizing the reservoir with a process known as “kick and kill” was highlighted in Dr. Jones’s talk, as well as the strengthening approaches of gene therapy, immunotherapy, vaccines, and more. Some surprises Dr. Jones uncovered included the size and the viral quality of the reservoir. He noted that the genetic material of the virus can be defective, and, in fact, at a rate of 98%. This illuminating fact has provided a portal in the dam for researchers to closely assess defective versus effective genetic material. Following this approach, explains Dr. Jones, is “faster and cheaper” in terms of analysis and provides a clear path to focusing in on infectious materials for clinical development.

Additionally, Dr. Jones proposed in his talk that investigations should analyze both blood and lymph nodes for HIV infection. It appears lymph nodes disproportionately affect development of the HIV-infected cells, he explained, and it has become an “aspirational goal” to identify lymph nodes and other tissues in the body that are involved. Other recent discoveries in the field show that HIV cells can clone themselves in the body – whether they be defective or intact. They can proliferate and increase, even when infected counts in the blood are not necessarily showing an increase. This is good news, Dr. Jones emphasized, as it reveals that the reservoir is naturally rising and ebbing on its own - because some of the cells are obviously killing themselves.

Dr. Jones covered these new scientific findings and more, while underscoring that a complete cure for AIDS is a “long-term goal” and that more “basic science research is needed to improve methods for targeting and measuring persistent sources of the virus.” 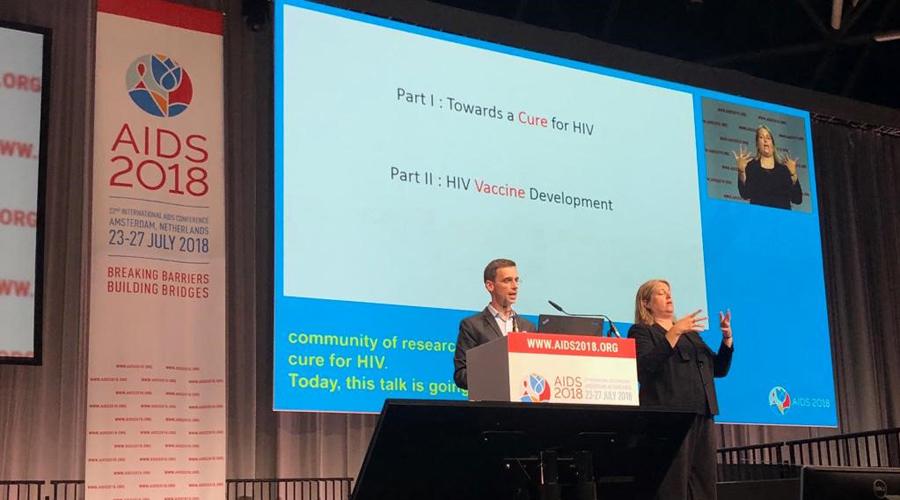 “Personally, it was an honor to have been selected to give this talk,” says Dr. Jones. “It was a remarkable chance to teach people something that may have been previously inaccessible to them in a way that they would hopefully understand and hopefully get excited about. Thinking about it this way also helped me get creative, in particular by including some Dutch-themed metaphors to help explain some concepts.” 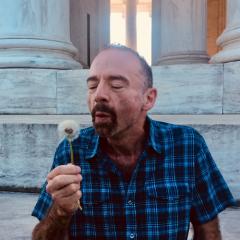 Timothy Ray Brown makes a wish for others to be cured.
Photo by Talia Mota

Thus far, there has been only one “known cure” for HIV-AIDS achieved, and that good news is represented by one individual – Timothy Ray Brown – who appeared at the conference.

Closing with an empowering message, Dr. Jones stated, “Just as HIV research has benefited other fields like cancer, the seeds of discoveries we are sowing now will drift into the future to form the basis of cures in the future.”

Before joining Weill Cornell Medicine in July 2018, Dr. Brad Jones was with George Washington University serving as an Assistant Professor in the Department of Microbiology, Immunology and Tropical Medicine. He received his PhD in immunology from the University of Toronto, where he studied the cellular immune response to HIV infection, and continued this work as a postdoctoral fellow at the Ragon Institute of the Massachusetts General Hospital, Massachusetts Institute of Technology and Harvard. Currently, he is focused on understanding how to maximally harness the “cytotoxic T-cell” arm of the immune system to contribute to the elimination of the HIV reservoirs that persist in individuals on long-term therapy, and thus to inform efforts to cure infection. This work is conducted primarily in the context of the NIH-funded Martin Delaney “BELIEVE” collaboratory, for which Brad serves as a co-Principal Investigator.