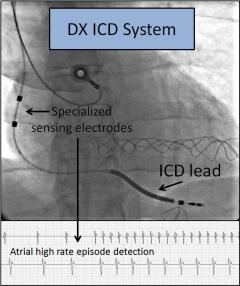 Dr. Jim W. Cheung, and Dr. George Thomas, Assistant Professors of Medicine in the Division of Cardiology, Weill Department of Medicine, have begun work on a multicenter project known as the SENSE study, to investigate the utility of a cardiac device, the Biotronik DX ICD system, for the detection of cardiac events called atrial high rate episodes. Atrial high rate episodes have been associated with an increased risk of stroke, heart failure and death. The study, which officially began in July 2014, has already enrolled six subjects and has recruited multiple leading centers across the United States to participate.

All ICD systems (implantable cardioverter-defibrillator) can pace the ventricles of the heart to prevent dangerous rhythms from developing, and can also deliver a potentially life-saving electric shock if necessary. Some ICDs (called “dual-chamber” ICDs) have an extra lead that can also pace and record the atrium of the heart. This may have benefits, but it may also create additional risks including those of lead perforation and lead dislodgement. Therefore, the role for dual-chamber ICD implantation for certain patient populations has been questioned.

The DX ICD system paces only the ventricles, which means it is a single-chamber ICD system, but it can also detect atrial rhythms and store the information it collects. Hence, it is possible that this detection function could provide many of the benefits of dual-chamber ICDs with fewer added risks. The purpose of the study is to compare the DX system to both dual-chamber and single-chamber ICDs for the ability to detect abnormally fast atrial rhythms. Study subjects are implanted with the DX system, and the number of atrial high rate episodes it detects are measured. These data will be compared to detection rates for single- and dual-chamber ICDs gathered from previous clinical and research data.

The investigators hope to identify an important role for the use of the DX ICD system for detecting arrhythmias with potentially significant prognostic and therapeutic implications.