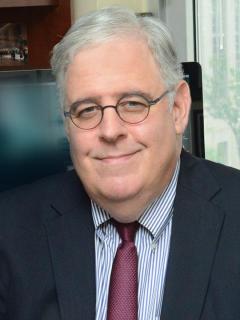 Joseph J. Fins, M.D., M.A.C.P., Chief of the Division of Medical Ethics, has been appointed to serve on the NYS Department of Health Palliative Care Education and Training Council. The three-year term appointment was made by Howard A. Zuker, M.D., the New York State Department of Health's Acting Commissioner. The news of Dr. Fins' new appointment to the Health Palliative Care Education and Training Council, came on the heels of his recent sabbatical at Yale University where he joined the Health Law Program as a Senior Research Scholar at the Yale Law School and the Dwight H. Terry Visiting Scholar in Bioethics in the University. He also has an appointment as Visiting Professor in the History of Medicine at the Yale Medical School. As a visiting professor at Yale, Dr. Fins gave lectures on clinical ethics, brain injury and human rights.

Dr. Fins is the E. William Davis, Jr. M.D. Professor of Medical Ethics at Weill Cornell Medical College where he also serves as Professor of Medicine, Professor of Healthcare and Research, and Professor of Medicine in Psychiatry. He is the founding chair of the Ethics Committee of NewYork-Presbyterian Weill Cornell Medical Center, where he serves as an Attending Physician and Director of Medical Ethics, and is co-director of CASBI, the Consortium for the Advanced Study of Brain Injury. In addition, Dr. Fins is on the Adjunct Faculty of Rockefeller University and a Senior Attending Physician at the Rockefeller University Hospital. Dr. Fins is an elected member of the Institute of Medicine of the National Academy of Science, an elected Fellow of the American Academy of Arts and Sciences, and an honored member of the Royal National Academy of Medicine of Spain.