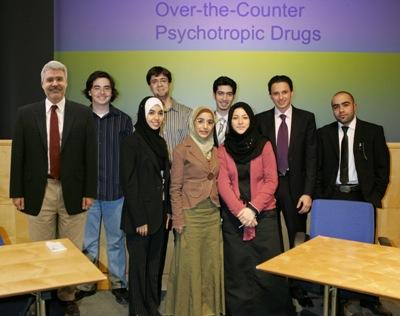 The question of whether medical drugs that enhance mood and cognition should be made available over-the-counter sparked great discussion among students, faculty and staff at the second WCMC-Q Debate in February.

Setting the scene, debate organizers Anas Abou-Ismail and Anas Ahmed gave a brief introduction and showed a short film on depression. Two teams of three students from the Class of 2010 and 2011 then took to the stage to debate the topic in front of an audience in lecture hall four.

Assistant Professor in the Division of Medical Ethics, Department of Public Health, Dr. Pablo Rodriguez del Pozo, an enthusiastic promoter of the debate, served as its moderator.

"This activity combines academic rigor, intellectual curiosity and respect for others’ opinions, which are the values that inspire the learning experience in this campus of Education City," Dr. del Pozo said.

After the formal proceedings, members of the audience, including special guest Dr. Ziad Kronfol, Visiting Assistant Professor of Psychiatry, were invited to ask questions of the team members and make comments.

"The team speaking against the motion was able to sway the audience towards their view more than the other team and therefore they won the debate," organizer Anas Abou-Ismail said.

As Dr. del Pozo, said, "Scrutinizing established paradigms gives us the chance to reaffirm them or to reject them, or, perhaps most likely, to do something in between. That is an essential part of student life."

Qatar Foundation's Doha Debates, a monthly public forum for dialogue and freedom of speech, and the Foundations in Ethics course taken in the second year of the Pre-medical Program, have been the inspiration behind the WCMC-Q Debates.